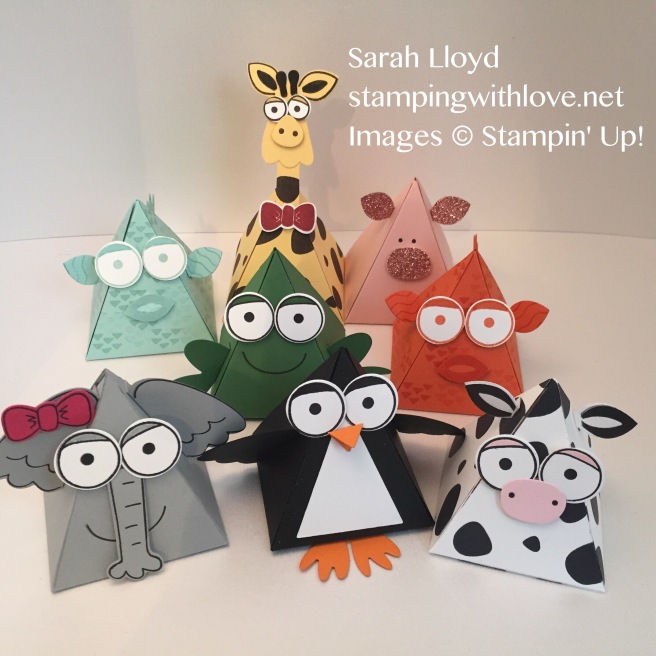 So my playful pals stamp set and pyramid pals thinlets had been sitting on my crafting shelf for a while. I was beyond excited to start having some fun with these pals, it’s just that I knew that once I started playing, I wouldn’t be able to stop and I was so right! My nephew’s 4th birthday party seemed like the perfect opportunity to try out this awesome bundle and I went to town. I created far too many pals to talk about individually but I will give special mention to my favourite ones:

I started with the frog and he was so simple to make but so adorable! I started by stamping his eyes onto whisper white cardstock and coloured the eyelids in with a garden green stampin’ marker. I then took a piece of 6” x 6” garden green cardstock and ran it through my big shot using the pyramid thinlet and I cut out the eyes and leg using those matching dies at the same time. You only get one die for each body part so you just need to run them through again to get another. Once I had my pyramid base cut out, I stamped the froggies’ smile onto the front part of the pyramid, adhered three sides of the pyramid together using tear and tape and left the fourth back part open. This cleverly folds into the back part of the pyramid without the need for glue which means you can fill your pals with treats and access them easily whilst preserving your pal! Finally I attached his eyes and legs using fast fuse.

My pig was constructed in exactly the same way as the frog, except I used blushing bride cardstock for the pyramid base and his eyes were stamped directly onto the front of the pyramid. His ears and nose were cut from the matching dies in blushing bride glimmer paper. He was a cutie.

To make the cow’s pyramid base, I cut my pyramid base from whisper white cardstock. I then mounted three different sized ‘spot’ stamps onto one clear acrylic block and stamped the spots in memento black ink all over the cardstock to create the cow pattern. If any of the stamped spot images were not entirely crisp, I filled in these parts with a basic black stampin’ marker. I coloured the outer part of his ears in using the same black marker and finally cut the nose from pink pirouette cardstock and coloured in his eyelids also in pink pirouette.

Once all my pals were made, I filled them with sweeties ready to distribute to a hungry bunch of 4 year olds. Don’t get me wrong, the kids loved their pals and I was delighted to see them opening them up and eating the goodies. But nothing could have quite prepared me for the parents, who seemed more taken with the pals than the kids! So fun to make, and adored by all, you just have to give these a go!! xx

Use this Hostess Code with your order in APRIL to receive a product gift from me to say thank you. Please DO NOT use the Hostess Code if your order is £150 or more as you will automatically qualify for your own hostess rewards.

All content on this blog is the property of Sarah Lloyd, Independent Stampin' Up! Demonstrator. Classes, services and products offered here are not endorsed by Stampin' Up! Projects, photos, videos and ideas are shared for inspiration purposes only and may not be removed, duplicated or copied without permission.
%d bloggers like this: